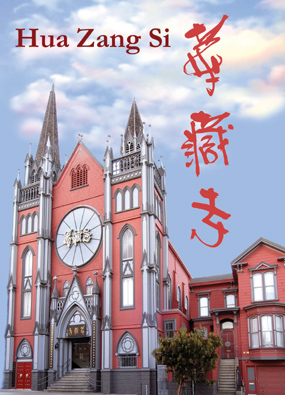 Hua Zang Si practices and teaches the dharma expounded by Sakyamuni Buddha. Buddhists disciples at Hua Zang Si cultivate themselves in strict accordance with the orthodox Buddha- dharma as contained in the tripitaka (the sutras or discourses, the monastic discipline, and the commentaries or treaties) as well as the esoteric scriptures. The temple respectfully upholds the rules laid down by Sakyamuni and teaches living beings in accordance with the 84,000 dharma methods handed down by Sakyamuni Buddha.

Some of the main dharma teachings of our temple include:

*1.      The dharma method of the Pure Land sect in which Amitabha Buddha’s name is chanted

*3.      The instantaneous and gradual realization methods

*4.      The dharma real visualization methods of the Hua- yen school

*8.      Stabilizing meditation as taught by the Hinayana school

9.      The four types of yoga as taught by the esoteric schools

Eminent monastic and laypersons of great virtue will teach these dharma methods based upon the disciple’s particular karmic conditions. Our mission is to treat all living beings with great loving- kindness and compassion, to bless them, to eliminate evil and promote good, to pray for peace in our nation and the world, and to pray for the eternal well being of all living beings.

Therefore, Hua Zang Si is different from other temples that propagate only one sect within Buddhism. Strictly complying with the Buddha’s teachings, our temple contains the teachings of all of the various sects within Buddhism. Our viewpoint is not limited to a particular sect. Some of the main dharma teachings of our temple include the following: the dharma method of the Pure Land sect in which Amitabha Buddha’s name is chanted, Zen meditation, the instantaneous and gradual realization methods, the essence of visualization of the Hua-yen school, methods of the consciousness-only or Fa-hsiang school, the four types of yoga as taught by the esoteric schools, the essence of Mahayana methods, and Shamatha or stabilizing meditation as taught by the Hinayana school. Eminent monastics and laypersons of great virtue will teach these dharma methods based upon the disciple’s particular karmic conditions.

Hua Zang Si was legally constructed with the permission of the local government. It is an impressive-looking temple within the city of San Francisco. The Shakyamuni Buddha Hall is on the first floor. On the second floor, there is an Amitabha Buddha Hall. In that hall there is a large circular mandala on which a Yun sculpture depicting Mt. Sumeru is placed. In that Yun sculpture are shariras (sacred relics) of the Buddha for worshipping. The third floor contains a library of Buddhist scriptures. The temple’s statues of Shakyamuni Buddha, Amitabha Buddha, Maitreya Bodhisattva, and Skanda Bodhisattva are very dignified-looking Buddhist statues. The sitting statue of Amitabha Buddha is 21 feet high. It is an extremely solemn sight.

There are precious and wonderful couplets composed by H.H. Dorje Chan Buddha III Wan Ko Yeshe Norbu (Master Wan Ko Yee) praising the Buddhas. These couplets can be seen near the temple gate, in the Maitreya Bodhisattva Hall, in the Shakyamuni Buddha Hall, in the Amitabha Buddha Hall, on the sacred shrine of Skanda Bodhisattva, and on the pavilion that contains evidence of holy feats. The verbal parallelism and symmetry of these couplets are flawless, and the style in which they are written is elegant. These couplets contain a profound and mysterious truth. They directly point to the holy truth regarding the nature of the mind and reality. When comparing these couplets to those written throughout history, these couplets can truly be called unique and refined. They have brought to the West the truth of the Buddha-dharma.

The abbess of Hua Zang Si in charge of dharma matters and the abbess in charge of all other matters were appointed in 2004. They have followed the Master for seven years. They comply with the precepts impeccably and are very much worthy of respect.

It is also noteworthy that Hua Zang Si is the only temple in the United States that has holy objects. There are six such treasures. The first treasure consists of the shariras (holy relics) of Shakyamuni Buddha and the Yun sculpture on the circular mandala described above. This Yun sculpture of Mt. Sumeru is a unique treasure in the world. With the addition of holy Buddhist shariras inside the sculpture for worshipping, it is the first treasure of Hua Zang Si. The second treasure is the magnolia tree that rained nectar for three successive days. That event was seen by many people and widely reported in the media. That tree has been moved to Hua Zang Si and has been planted there as an object of veneration. The third treasure is the lotus tub used at the Ultimate (or Highest) Form of Bathing the Buddha Dharma Assembly in which the seven holy states were manifested, thereby showing the power of the Buddha-dharma in front of many people. In October of 2004, at a grand ceremony, this tub was placed in the pavilion at Hua Zang Si as another object of veneration. The fourth treasure is the Guru Padmasambhava dharma tent that has a sign of impermanence on the top. This sign is the result of a several-hundred-year process being condensed into a few minutes. The fifth treasure is a mani treasure manifesting the hidden dharma. The sixth is a holy dharma bowl that received nectar.

These six holy objects are provided for all good believers in Buddhism as objects of worship. These objects can help bless those who are sincere believers and help them strengthen their vows. These six venerable treasures are truly holy objects in Buddhism that are difficult to encounter in even thousands of eons. They are auspicious objects that provide great joy and are so rare in Buddhist circles in the world today. Those who piously worship the Buddhas and Bodhisattvas, who sincerely take refuge in the Four Jewels,will receive corresponding empowerment and will certainly be able to experience much good fortune and wisdom