1. The first Buddha in history to have received such a large number of recognitions and written congratulations from great dharma kings and rinpoches of the highest order in the world.

2. The first ancient Buddha in history to have been recognized as having such a high status.

3. The first ancient Buddha in history who has shown such outstanding and complete proficiency and mastery of exoteric Buddhism, esoteric Buddhism, and the Five Vidyas, which nobody else has ever done.

4. The first ancient Buddha in history who has manifested such a large number of holy feats.

5. Buddhas bestowed nectar from the sky into a bowl in front of several dozen dharma teachers, persons of great virtue, and others.

6. When transmitting dharma to disciples, predictions were made as to when those disciples would become accomplished in the dharma. Those disciples were able to take a trip to the Western Paradise of Ultimate Bliss. After they returned to the human realm, they passed on to that paradise at the predicted time.

7. Many incarnations of extremely famous and virtuous patriarchs from Tibet and other countries are disciples of this ancient Buddha.

8. Dragon spirits, birds, and land animals became disciples of and came to hear dharma discourses of this ancient Buddha.

10. Manifesting the wisdom of a Buddha, wondrous multicolored sculptures and sculptures with mist inside them were created. Nobody else in the world can replicate such works.

11. The first ancient Buddha who benefits living beings but does not accept any offerings.

12. The only one who possesses Buddha-dharma that causes a disciple to attain enlightenment and liberation within two hours. It is the fastest Buddha-dharma practice where a disciple can enter and leave a Buddha-land at will. 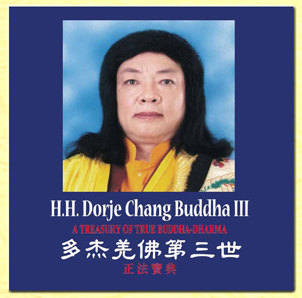 WASHINGTON, April 9 /PRNewswire/ -- The following was released by the International Buddhism Sangha Association:

At a special ceremony held April 3 at the Library of Congress of The United States, the International Buddhism Sangha Association (IBSA) presented to the American people the newly-published precious Buddhist book called H.H. Dorje Chang Buddha 3.

Dr. Judy S. Lu, Director of the Asian Branch of the Library of Congress accepted the book from the Venerable Dharma Teacher Long Hui, president of the IBSA. According to the Venerable Long Hui, the publication of this precious book H.H. Dorje Chang Buddha 3 announces to the entire world the news that a true Buddha has descended into the world. This incarnated Buddha is Dorje Chang Buddha (aka Buddha Vajradhara), who is the primordial and highest Buddha according to the lineage charts of all Buddhist sects. The entire name of this Buddha is H.H. Dorje Chang Buddha 3 Holiest Tathagata Wan Ko Yeshe Norbu. More than fifty of the world's highest great dharma kings, rinpoches, and other persons of holy virtue have recognized or congratulated His Holiness as being the true incarnation of Dorje Chang Buddha. Those recognitions were made in accordance with the standard rituals of Buddhism by which such an identity is recognized. No other person in history has received so many recognitions from people of such high status. The publication of this book reveals that H.H. Dorje Chang Buddha 3 Holiest Tathagata Wan Ko Yeshe Norbu is H.H. Master Wan Ko Yee, who now resides in the United States. People around the world know H.H. Master Wan Ko Yee as a Buddhist Master who is completely proficient in exoteric and esoteric Buddhism and who has perfect mastery of the Five Vidyas. (Read More)

RECOGNITIONS IN ACCORDANCE WITH THE DHARMA

Traditionally, the vidyas are divided into the five major vidyas and the five minor vidyas. The five major vidyas are the silpakarmasthanavidya (craftsmanship vidya), the cikitsvidya (healing vidya), the sabdavidya (sound vidya), the hetuvidya (causality or Buddhist logic vidya), and the adhyatmavidya (inner realization vidya). The five minor vidyas are rhetoric, ornate diction, prosody, dramaturgy, and astronomy. Actually, the Five Vidyas are not that narrow. Everything in the universe can be classified into five aspects of brightness and darkness. To develop everything that is good in the universe and that benefits living beings is classified as "bright". That which confuses and is bad is classified as "dark". This is the real meaning of the Five Vidyas (Five Bright) of which the Buddha spoke. (See 5 Vidyas in 30 Categories)

No Other Great Holy Being Can Compare with My Root Master
H.H. Dorje Chang Buddha III

I am Xirao Jiebu II. In a prior life, I was a disciple of Guru Padmasambhava and was also a disciple of the great historical master Shantaraksita. I am embarrassed to face the Buddhas and Bodhisattvas. However, due to causes and conditions planted since beginning-less time, I feel obliged to divulge certain karmic fruits of mine. When I was a child, I became the first disciple of His Holiness Dorje Chang Buddha III. Dorje Rinzin, who is the incarnation of Rigzin Terdak Lingpa Unchanging Vajra, conducted an initiation for the Dzogchen Monastery''s seventh Dzogchen Dharma King and other great rinpoches last month. At that time, they asked me whether I had seen many holy feats performed by H.H. Dorje Chang Buddha III. (Read Full Article)

excerpt from Treasury of The True Buddha Dharma Book

From the time H.H. Dorje Chang Buddha III Wan Ko Yeshe Norbu Holiest Tathagata descended into this world, His Holiness has always wanted to renew the world of building material thoroughly so that ordinary families could enjoy the splendor of earthly mansions and the beauty of heavenly palaces. His Holiness has always wanted to replace common tiles, marble, and granite slabs in the old style with halls as gorgeous and resplendent as gemstones and with rustic, charming dècor that people with refined tastes can appreciate. Based on this desire, H.H. Dorje Chang Buddha III wielded his brush and applied colors. As a result, extremely beautiful and glittering jewel-like floor and wall tiles were born! There are also excellent tiles with an ancient, simple, unadorned look, such as tiles in a more rustic style and tiles that look like unearthed cultural relics. (See Category 25- Tiles The Most Beautiful Building Material in the World)